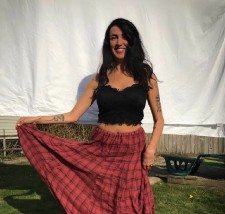 Musician Kinnie Starr acquired a brain injury in 2015 after a distracted driver collided with her taxi in downtown Vancouver at 70 kilometres an hour. But she didn’t know about it until 18 months later.

“I knew nothing about brain injury [before my accident],” Kinnie says. “For the first few months, the focus was on my physical injuries. I had an injured spine and limbs.” As she worked through rehabilitation for her physical injuries, she began to realize that something else was going on.

“When I laid down to go to sleep, the bed would be spinning. I was experiencing sensations such as the room moving, depth-perception issues, and my spatial relationships changed,” she says. Kinnie knew these things were real, but because of the brain injury that hadn’t been discovered yet, she had trouble drawing attention to what she was experiencing – especially since her other injuries were more visible and immediate. “There were a lot of other physical matters with my legs, pelvis, shoulders and spine. And I couldn’t articulate what was happening because of the brain injury.”

“My husband is the person who noticed something was off. He said I was flipping my sentences, had slurred speech, and my walk had changed,” Kinnie says. “It was about a year, a year and a half before I was [officially] diagnosed.”

Finding answers and the right rehabilitation

The process of finding answers and treatment was a long one for Kinnie and her family. Once it was clear that something was going on besides her physical injuries, it took some time to find the right solutions.

“I was boggled with [the] medical investigation,” Kinnie says, trying to describe what it was like to live with a brain injury and find a diagnosis. “It’s…you’re just in it”. When she did receive her diagnosis, Kinnie started multiple kinds of rehabilitation – many of which she continues to this day. “I’m still ongoing with rehabilitation – for example cold laser therapy, sensory deprivation, and going to a chiropractor.”

While the therapies are a big help, Kinnie still faces challenges every day. “I still have to be careful with changes in light,” she says. “I try to build self-care into my days; take time away from stimulus. For example, I carry an eye mask with me to create my own dark space. Even if it’s just a few minutes in an airport bathroom where I can get a little privacy – it makes a big difference for me.”

Kinnie’s other self-care tip is simple: “put your phone down.” It may seem small, but for Kinnie replacing part of her scroll time with other activities or rest made a big difference.

The impact on her music

The impact of Kinnie’s injuries had a profound effect on everything, including her livelihood as a musician. “I went from living my life to not being able to do my work,” she says. “I’m an artist – that’s my trade.”

It was challenging for Kinnie to put to words what her experience was like in the early stages of her recovery – particularly when it came to the changes in her abilities. “There’s no way to explain the lack when you aren’t in a standard work environment,” she says. “When you work alone, you don’t have people interacting with you, noticing changes [in you].”

It was difficult for Kinnie to even sit down and pick up her instrument. “I couldn’t play guitar: even looking at it I vomited or fell off my stool,” she says. She would even occasionally experience the sensations that accompany urination.

When Kinnie had her accident, she had already committed to another album called Feed the Fire. “The record label hired a producer (Douglas Romanow) to help me meet my contract,” Kinnie says. “It was the first time I had a co-writer. It was really interesting.” Kinnie was used to working solo, and even when working with Douglas would continue to write the lyrics privately.

Co-working and her brain injury made for an unusual schedule that neither of them were quite used to. “When we started I could only do about 45 minutes at a time, and then I’d have to take a break or be done for the day,” Kinnie says. This was a change from the full days of work she had been able to do in the past. “The album workflow was so dynamic, very stop and start. He [Douglas] turned out to be a good friend and was incredibly patient,” Kinnie says.

With patience and hard work, Kinnie has made incredible improvements in her recovery and her music. “Now I can do 8 hours a day. And 6 months ago (2019) she was able to start playing guitar again. It was a big milestone, one she was happy to celebrate.

The way brain injury impacted Kinnie changed her outlook on being an artist. “I’m a new person. I’ll never take my musical skill set for granted again,” she says.

One of the biggest challenges Kinnie has experienced is the lack of knowledge and understanding about brain injury. While her husband, mom and other family members and friends were incredibly supportive, other people didn’t understand what was happening.

“People don’t understand brain injury. Some thought I was just being emotional,” she remembers. Now, a few years after the accident, she’s hoping to help change that.

“[After the accident] I didn’t know where to go for help – even my doctor didn’t know I had a brain injury,” she says. “There’s a lot of misinformation about how a head injury presents itself,” she adds. It’s not just one set of symptoms – it’s a whole range of them, and many are invisible.

Kinnie is also trying to bring more attention to the differences between genders when it comes to head injury. During the legal case for her accident, her lawyer was representing 3 other women with head injuries, all of whom were experiencing drastic changes to their reproductive health and sexual functions. “Because there is a history of women’s sexual health being tied exclusively to reproductive function, women over 30 who experience sexual dysfunction from brain injuries are readily accused of histrionics…should their issues be brought to court. Men, on the other hand, can readily demonstrate loss of sexual function because (for them) it is visible,” she says. This was an eye-opening discovery for Kinnie. She has spent time working with researchers at the University of Calgary on a medical journal article (being published soon) about women and concussion in an effort to further this particular conversation about brain injury and gender.

Kinnie has been actively involved in many other projects since her injury, including the documentary Play Your Gender about the gender wage gap in the music industry, and was a musical partner for the Haida language film Edge of the Knife. She also has new tracks coming out in 2020. It’s safe to say that brain injury has not impacted Kinnie’s drive to support what she believes in and to share her music.

For more information about her music and to listen to her songs, you can visit her website or check her out on streaming services.