The brain is made up of nerve tissues and controls all parts of the body and bodily functions. It is responsible for learning and understanding information and is the hub for all emotions, experiences and decisions.

The brain is divided into three main parts:

The spinal cord is attached to the brain stem. The meninges is the layer of tissue covering the brain. 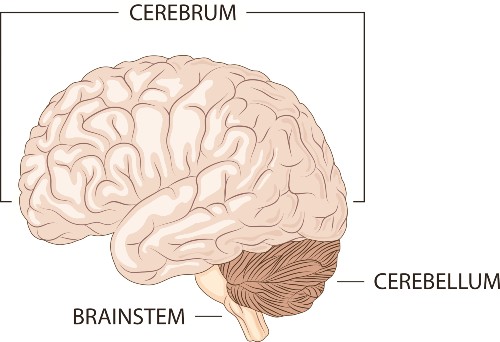 The cerebrum is covered by the cerebral cortex. This is commonly called grey matter. It gives the brain a wrinkled appearance. Each fold in the grey matter is called a gyrus, and each valley between the folds is called a sulcus. These folds and valleys increase the number of neurons in the brain, meaning the brain can function at a higher level.

The 4 lobes of the brain

Within the cerebrum and the two hemispheres, there are 4 lobes of the brain that control different functions. 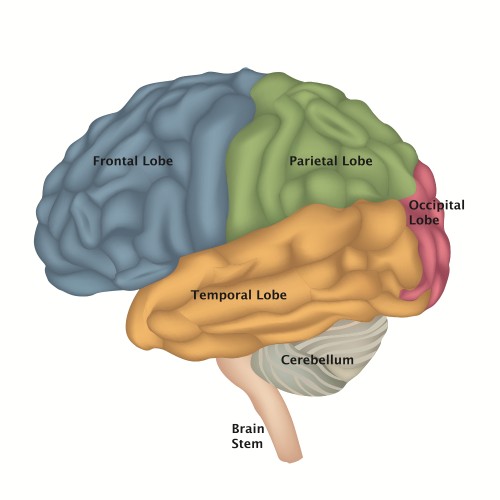 The left side is responsible for recognizing speech and words. Damage to the left parietal lobe may lead to problems in reading and math. It can also cause a loss of sensation on the right side of the body. This means that you would have changes in how you feel touch or pain, vision, or temperature changes on your right side.

The right parietal lobe is responsible for visual and spatial recognition. This includes shapes and body orientation when moving around. Damage to the right parietal lobe may lead to problems with spatial tasks, like making sense out of pictures, diagrams, and reading maps. Damage may also cause changes in sensation on the left side of the body.

Temporal lobe
The temporal lobe is responsible for distinguishing smells and sounds. It also completes the following jobs:

There are left and right sides in the temporal lobe.

Damage to either side of the frontal lobe may lead to problems with emotional control, social skills, judgment, planning, and organization.

Damage to the left frontal lobe may cause problems with speech and moving the right arm or leg.

Damage to the right frontal lobe may cause problems moving the left arm or leg.

Diving deeper into how the brain works, there are cortical and subcortical structures that have more specific functions.

Basal ganglia
The basal ganglia is a group of neurons located at the base of the cerebrum. It is responsible for gross motor function, posture, and balance. It also helps with automatic learning of movements used without conscious thought, like walking, biking, or picking things up.

Damage to the basal ganglia results in difficulty moving, or an inability to perform some of these basic automatic actions.

Hypothalamus
The hypothalamus is a small section at the base of the brain that controls the nervous system through hormone production and release. It is responsible for regulating things like:

Damage to the hypothalamus can result in lack of motivation, changes in thirst/hunger routines, feelings of euphoria, hyperactivity, or altered sleep patterns.

Thalamus
The thalamus is the central relay station for incoming sensory information. Every sensation you experience travels through the thalamus. It plays an important part in pain information, memory, alertness and attention span.

Damage to the thalamus can result in many symptoms, including trouble processing information and spatial neglect.

Limbic system
The limbic system is responsible for all brain structures involved in emotion, motivation, and association with memory. This includes remembering emotional states and physical sensations. Damage to the limbic system can affect your ability to process and store information, as well as cause disruptions in emotion. Within the limbic system are several structures.
Parahippocampal gyrus
The parahippocampal gyrus is responsible for spatial memory formation. This means you remembering where objects are or where things happen in proximity to the body.
Cingulate gyrus
The cingulate gyrus controls autonomic functions like heart rate regulation. It also controls cognitive and attentional processing.
Nucleus accumbens
The nucleus accumbens mediates reward-based feelings. It also controls sensations associated with addiction.
Olfactory bulb
This pea-sized part of the limbic system receives smell inputs and transmits them using olfactory tracts to other parts of the brain. It helps identify smells.
Corpus callosum
This is the largest white matter portion of the brain. It is an area of nerve cells located between the right and left hemispheres, and it allows them to communicate with each other. Cognitive, motor, and sensory information can be shared between the two hemispheres. Through these connections, we experience connected vision and connect objects with language.
Mammillary bodies
There are two mammillary bodies, and they help pass information to other parts of the brain that are in charge of creating memories.
Hippocampus
The hippocampus is responsible for creating long-term memory. Any damage to this area of the brain would result in difficulty or the inability to create memories.
Fornix
The fornix connects the hippocampus and the mammillary bodies. The hippocampus uses the fornix to transmit information, which the mammillary bodies receive information.
Amygdala
The amygdala processes feelings like love, aggression and fear, and the responses of the body when you experience those feelings. It also helps us recognize those emotions in other people.
Stria terminalis
The stria terminalis connects the amygdala to the hypothalamus along the surface of the thalamus. It helps regulate responses to stress in its role as an output path from the amygdala.

The cerebellum is located at the base of the back of the brain and integrates sensory perception and motor output. This includes:

Connected to multiple parts of the brain, the cerebellum coordinates voluntary movements. This results in a smooth execution process when it comes to things like walking, speaking, and smaller movements like lifting and reaching. Damage to the cerebellum may cause problems with coordination, balance, or muscle tone in different parts of the body.

There are three main parts of the brainstem.

Midbrain
The midbrain is responsible for auditory and visual reflexes. It controls eye movements, processes sight and sounds and how your eyes and ears react to the environment.
Pons
Pons is the largest part of the brain stem. It acts as a bridge between the cerebrum and cerebellum. The pons controls various parts of the body, including facial nerves and movements. One of its most important roles is as a respiratory information centre. The pons controls breathing, including information on carbon dioxide and oxygen levels.
Medulla oblongata
The medulla oblongata also helps control respiration through controlling the heart and lungs. It is responsible for vasomotor actions, cardiac functions and reflex actions like sneezing or coughing. Any damage to the brain stem can cause physical and sensory problems. This includes:

In the most severe cases, damage to the brainstem can lead to coma or paralysis.

This is a basic overview of parts of the brain and how they work. If you have more specific questions, ask to speak to a neuropsychologist.